The web and mobile app development services have stepped up to next level in last 5 years. Web and apps are all built utilizing a ‘stack’ of various technologies like MEAN Stack, MERN Stack, LAMP Stack etc.

Because of invention of so many languages in web and mobile development, it is advisable to understand and choose right language, framework and technology before starting a development.

Before going further, it is essential to understand what “Stack” stands for? A “Stack” refers to any combination of programming languages and technologies used to develop a project. For example, MEAN stack is a acronym of MongoDB as database, Express.js as server, Angular.js as frontend technology and Node.js as a server side scripting language.

Unlike MEAN, Full Stack is not a acronym of any web technology or development language. On the other hand, MEAN stack is combination of 4 core components – MongoDB, Express.js, Angular.js, and Node.js.

With inception of Node.js, it has enabled programmers to execute JavaScript code on server which supports asynchronous programming. Hence, it becomes easier for programmers to write both server side and client side code in JavaScript. Express.js is a server-side web framework developed based on node.js which comes with features to simplify server-side web development. 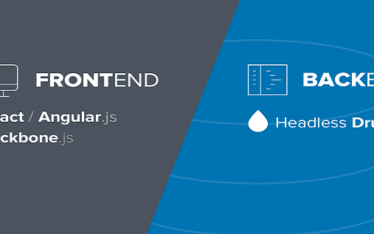 Headless Drupal or DeCoupled Drupal
Now a days, front-end technologies like Angular, React.js, Backbone.js etc have started attracting audience because of its advantages over traditional rendering approach. Server side frameworks like Laravel, Node.js have already...
165 LikesLeave a comment